I’m sorry I’ve been neglecting you, blog. March has been so hectic, I haven’t been working out. I’m not terribly sad about it, I’m watching what I’m eating (watching it go down the hatch) and I know eventually I’ll start back at the same speed I was going. I just really like to take breaks. So, an update on what’s been occupying my mind lately!

Dave and I are (probably) moving! For the last few months we’ve realized we are quickly running out of space in our current condo. We have about 800 sqf of space, 2 bedrooms, 2 bathrooms, and it’s in a great location, but my family continues to grow (meaning we love having visitors and they are getting bigger, I’m looking at you Maddy) and eventually we are going to be bumping into each other at every turn. Plus, Dave and I are eventually going to start trying for a baby and I can’t have a baby without a spare room for my mom to come visit me in so she can talk me through all the terrible baby stuff I’ll be crying about.

I started to look on Kijiji for a place to rent and Dave, Alana and I went to see 2 over the weekend. Both had their cons, and sadly no pros. One landlord was terrifying and raised Pitbulls in the back yard and the apartment was scary, the other place smelled like decaying Vaseline but the landlord was very nice. Obviously we didn’t take either place. My co-worker mentioned he knew someone who was looking for people to rent her condo that was being built so he sent me the floor plans, which we promptly put into Photoshop and put all our furniture in to scale to see how much room we would have, and we took a drive up to see the area. We tried to go into it but there was so much mud we couldn’t get through it. Dave thought it was weird Alana and I had no problems going into a house that was being built, but like we explained, we’re from Northern Ontario, going into houses as they are being built is a favourite pastime. Because it isn’t done being built we found a similar unit and peeked in the windows. It seems gorgeous. We met with the owner and she said we looked like a couple out of a picture book, so I think it’s pretty much a done deal. We are just waiting to hear when her closing date is, but it looks like we might move sometime between June 1 and August 1. I’m excited! I can’t wait to have room for my cats to hang out in. The cutest thing Dave said when we suddenly got serious about moving was that he didn’t think it would happen so fast and now he has to start deciding how to set up his basement to accommodate all the gaming he wants to do. 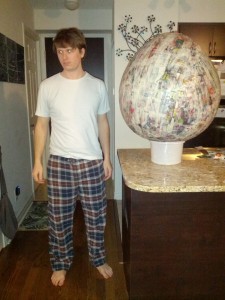 The other thing that is taking up a lot of my time is making a giant egg for my niece, Kathryn, to sit inside for a photo shoot. It’s coming along, even through the annoying set-backs. This weekend Dave and I are going to paint it and then hand it over to them. It basically cost me $1.25 to make so I won’t be upset if she kicks right through the egg, trying to escape it. We’ve cut it in half and have fixed the giant break that the balloon expanding inside the egg caused. I think for a first try at making anything this big with paper mache we’re doing a great job. Hopefully our painting doesn’t totally ruin our efforts.

Harris is a huge scamp in our lives, so the third project I’m undertaking involves making slip covers for my kitchen chairs, which she has destroyed. They are fake leather and she loves scratching them to shreds. Because we didn’t stop her when she was a kitten there’s little hope in saving the fake leather now, but we are buying her a cat condo so she can scratch that and I’ll work on making slip covers with Nicole to put over the chairs so she forgets she loves destroying them. I found a pattern here that looks simple enough for me to follow. I don’t own a sewing machine though, so Nicole is going to let me come over and use hers. Last night I bought 2 meters of fabric, I think it’ll be enough to cover 1 chair. Did you know fabric is really expensive? I didn’t. Some of it was 32 bucks for 1 meter, I laughed. I ended up choosing a grey pattern 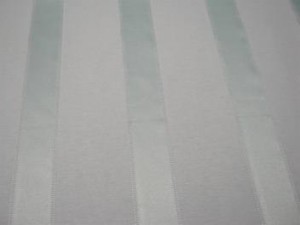 , similar to the one on the right. It was only 4 bucks a meter, much more affordable, Fabricland! Even if I mess up the project I can afford it for 9 dollars. I want to do 4 chairs in this fabric and then the other 2 chairs in a patterned fabric, something more like this or this. We’ll see how we do. Nicole has made blinds and her own Halloween costume before while I, on the other hand, have never used a sewing machine because when my mom was little she sewed her hand into a Kleenex and I never got over that traumatic story. I think we’re going to do great. 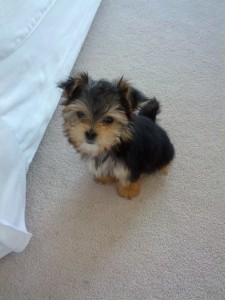 Sara, Matt and Leighton got a puppy! We went to visit her over the weekend and fell in love. She’s adorable. So teeny and runs around like she totally owns the place. She’s a Morkie. She won’t get very big but she’s always going to look like an ewok. I loveeeeeee her. She fell asleep in between Dave and I and I wanted to be like “Sorry everyone, stealing your dog now, good bye!” Next weekend is Easter and since Dave and I don’t have a house (yet) Sara said we could do Easter at hers and cook the turkey for the fam. Can’t wait to see this little one again. And Leighton too. Even though she got Hokey-Pokey stuck in our heads for 2 days last time.

So that’s what I’ve been up to. Excited to potentially move, excited to finish the egg, excited to start the slip-covers, excited to see my family for Easter, excited I have a new fur niece named Moona. Things are good. If only I would throw working out into all this happiness!

Don’t let me go that long again without working out, getworkingsteph.com! 26/30. I am 4 days away from my goal of doing the whole Shred. I’ve let myself down a bit not completing it in 30 days straight and in stopping for 11 days in a row but I got off my butt today and did something so I feel back on track.

I guess I have to learn some times I really, really, *really* won’t want to work out. In those times even Dave can’t convince me to do anything. I have to convince myself. I’m happy I did it. I feel better already. At the same time I don’t want to let myself off the hook I have to also acknowledge that I worked out 21 out of 28 days in February. That’s amazing.

So, a little bit of a setback in stopping for so long, but getting back up and starting again means I haven’t given up completely. I’ll be done the Shred by the end of the week, and onto a more conducive workout. Go me! Just don’t forget to keep going, me.