On the way to Ottawa I was telling Dave he was no fun because he never bets me anything. I tried to convince him that I could sell a joke for $25 within a year, but Dave said jokes aren’t real property anyway so it wouldn’t count (and he didn’t care). Together we came up with a real bet, because I wouldn’t drop the subject.

Because I’m great at giving up after I work out for a few weeks we made a bet that would encourage me to keep going. Here are the details:

2. For every day Steph does not work out Dave gets to buy a pack of magic cards, which will be collected every 3 days missed.

3. If Steph misses more than 36 days in the entire time Dave gets to buy an extra booster box of magic cards.

4. If Steph misses less than 36 days she gets a giant prize, think lasik eye surgery.

I’ve worked out 3 days this week so far. And I’ve logged my food 2 days. It makes me sad. I wish I didn’t have to do anything to lose weight (Kayla summed it up very well). But I also hate looking in the mirror or trying on clothes. And sadly the only thing that I know that works for weight loss is logging what I eat and working out every day. I have to essentially adopt an insane attitude to remind myself to get moving and eat in moderation.

How do I convince myself to keep going without it always feeling like such a chore?

Dave reminded me that the name of this blog is getworkingsteph and while I actually did start working out again this week I also started doing temp work. I’ve been off work for nearly 2 months since quitting my job in September. I needed a break, so I took a break. Not being DINKs for a while doesn’t really hurt Dave and I, but not having 2 people’s income means we can’t eat out whenever we want, or buy as many frivolous things that we’d normally buy and while that sucks we also aren’t in a position where if I don’t work for 2 months we’re screwed. So I took some time off, a mental holiday as it were. And while I loved not working, I also really love money. So with Xmas coming up I emailed the old company I temped for 1 time 2 years ago and asked that I be put back into the rotation.

What I didn’t know was that the company had sold in the 2 years I didn’t use them. The new owner was given my email by the old owner and she emailed to ask when I’d like to start temping. Having never met the new owner or being anywhere near their new office they started to call me and email me asking if I’d like to take assignments. So I started to accept short temp positions this week and got working (Steph).

I realize a lot of people would not be cut out for the temp lifestyle but I kinda dig it and I thought since my blog is devoted to me working talking about each temp placement might be fun.

I don’t plan on temping every day, if I wanted that kind of stability I’d apply for real jobs, so don’t worry reader (Mom), I won’t wear you out with boring office stories too often. What I will do is bring you a small glimpse into the world of an office temp. You might not realize it but it’s hard out here for a temp.

We departed Venice on Saturday morning around 9. And waited until 12 in the train station because for the first time the entire trip all the trains from Venice to Rome were sold out. I was sad. We took turns watching the bags and wandering around near the train station. I had to buy Alana a magnet because I’m a D-bag about trains.

The train we took was really nice. The express trains which are owned and run by an independent company are more expensive than the country owned trains and a lot nicer to be in. The riff-raff can’t afford them so everyone on board is likely a tourist and not from Italy, or that’s what it seemed anyway.

We were starving on the train. Because we didn’t anticipate the 3 hour way we hadn’t eaten. The sisters next to us had a feast while we looked on and quietly (re: very loud and obnoxiously) talked about their food.

After 4 hours we got to Rome. Strangely the last hotel we booked was also the furthest away from the train station. We had to walk 25 minutes to get to it.

We dropped off our stuff at La Locanda del Manzione, which is a nice hotel that has the weirdest beds but greatest bathrooms, and Alana and I went and made the worst decision that we would make on the entire trip. We ate at Chicken Hut.

Chicken Hut was a gross restaurant we passed on our way to the hotel but we were starving. Dave decided to hold out until we went to the restaurant we had booked reservations at the week prior so Alana and I went alone.

WIthout going into too much sad detail let’s just say the can of pepsi was the only edible thing we got from Chicken Hut. Let’s just also say when you order a chicken burger be prepared to eat something not resembling any food group and also smothered in barbecue ketchup.

We were sad. We sat on the most beautiful patio at our hotel and ate our sad Chicken Hut.

Then we got ready to walk to the restaurant. Dave dressed up. Alana and I saw a woman naked. It was a weird day in Rome.

La Taverna dei Fori Imperiali was awesome. The food was great, the staff are super nice, Woody Allen’s picture hung beside us. It was worth the walk and having to wait a week to eat there. After eating so much food we headed back to our hotel.

The next morning we woke up early and got on the subway to take us back to the Termini. From there we got on the same bus we had taken to get to Rome and headed for the airport.

We arrived 5 hours early which was good because the Rome airport is incredibly stupid and takes around 3 hours to negotiate, with the most insane amount of walking and passport checking.

I won’t bore you with the flight home details, just know that some man who sat in front me put his hand over the back of the chair and into my face so much that I nearly cried and had to go tell on him.

And with that Dave, Alana and I ended our Italy trip. I was sad that it had to end, even with the train malfunctions. I really liked it. I’d go back tomorrow if I could. Being a tourist is the coolest.

Italy, I’m coming back for you. France, I think you might be next.

First let me say I would go back to Venice tomorrow if I could. It’s the neatest, weirdest, prettiest city. Our train ride to Venice was the worst train ride we’d be on. Well no that’s not entirely true, Dave and Alana are sane people who don’t mind train stations, I on the other hand am an insane person who hates dealing with delays and missed connections. Our train was delayed from Florence so when we got to the connecting city, Bologna, we got on the wrong train to Venice. It was more expensive and we had to pay the difference. It sucked. Pay a lot of attention to connections, that’s my advice. We could have slept in and not had to do a connection at all if we had paid the more expensive price in Florence.

I cooled down by the time we got to Venice. I’m really great at getting mad for about 15 minutes and then acting like nothing at all went wrong. Sorry, Alana. 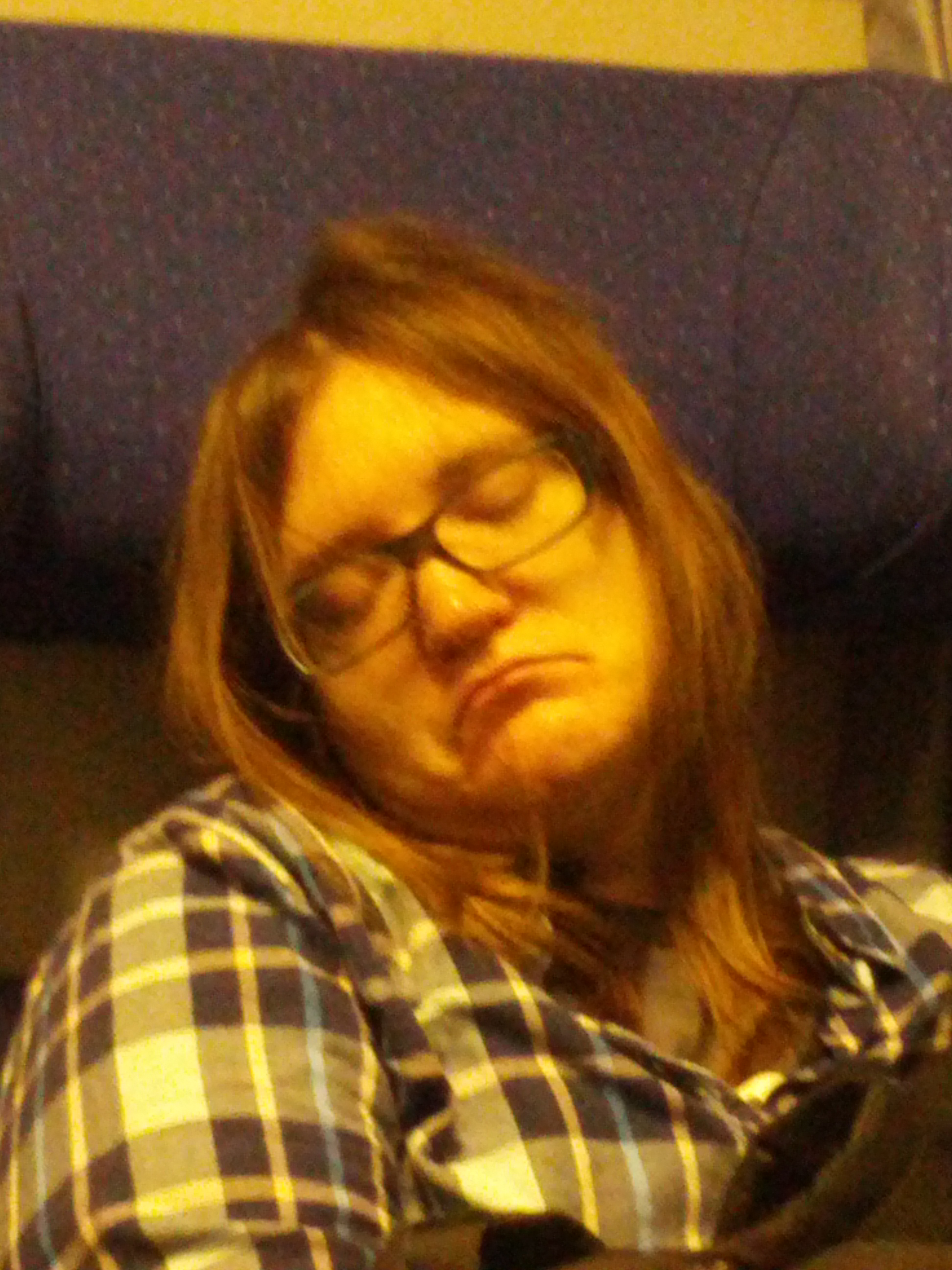 Our hotel, Casa Sant’Andrea, was really close to the train station for the 3rd time in a row, we were getting used to that. Book your hotels near train stations, I can’t stress that enough. Do it on purpose, not accidentally even like we did. This was the only time we had to share a bathroom with 3 other rooms. The bathroom was gigantic and we only ever had to wait a few times but it’s still annoying. Especially because we had requested a non-shared bathroom room. But we didn’t come to Venice to pee and shower only so we rolled with it.

The water taxis and busses are confusing and expensive and since we were used to walking 11 miles a day we headed off on foot to Alfredo’s. Alfredo’s serves fresh, as in they make it in front of you when you order, pasta. You tell them what kind of noodle, sauce and whether you want them to close it or not. There’s hardly any room to eat at the place and it’s really hard to find because Venice is a series of connected islands that each have a lot of side streets and back alleys that lead to the water. Alfredo’s was so good we went back there the second day. I’d go back there right now if it didn’t take an 8 hour flight, a 4 hour train ride and a 45 minute walk. 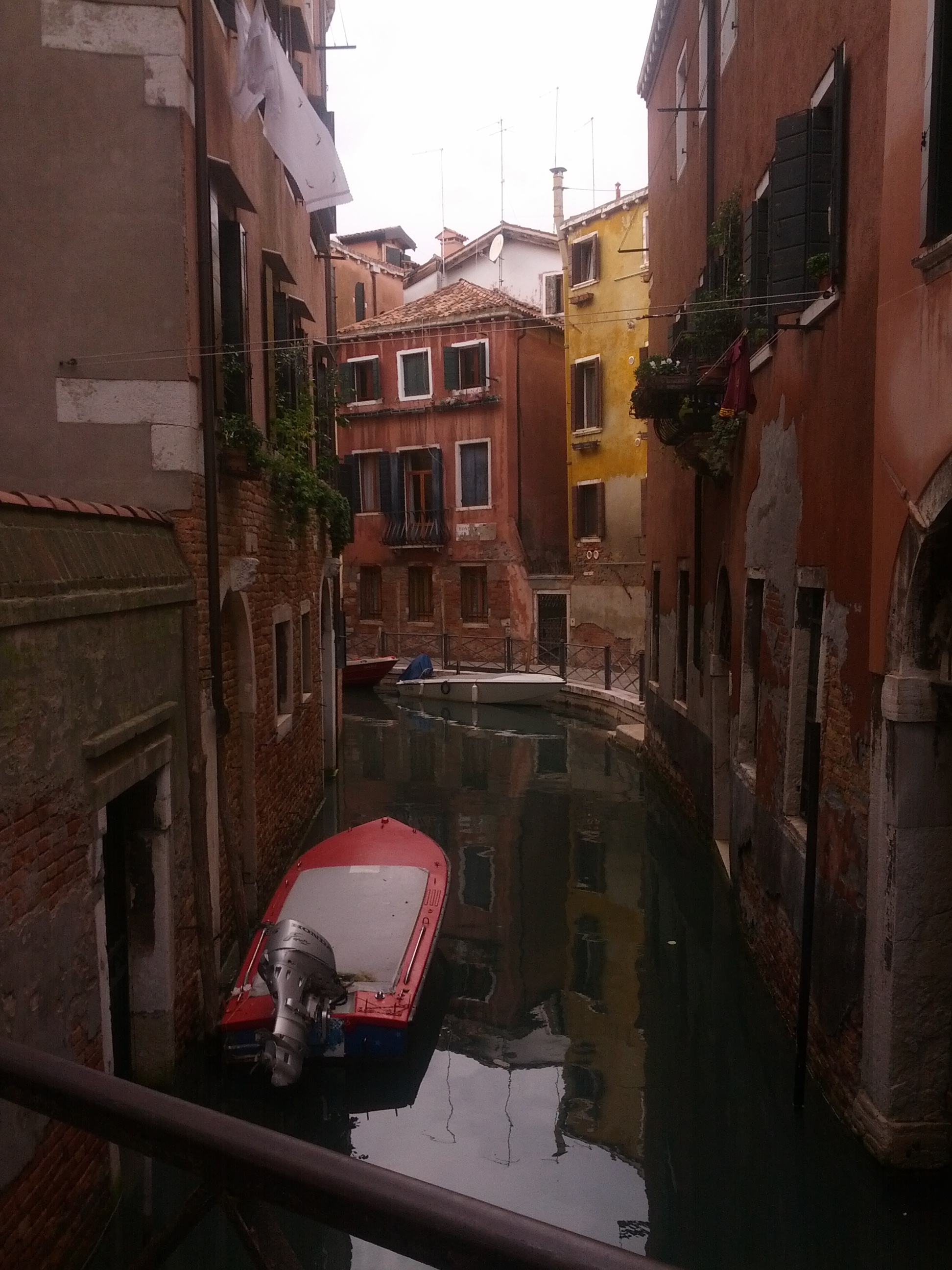 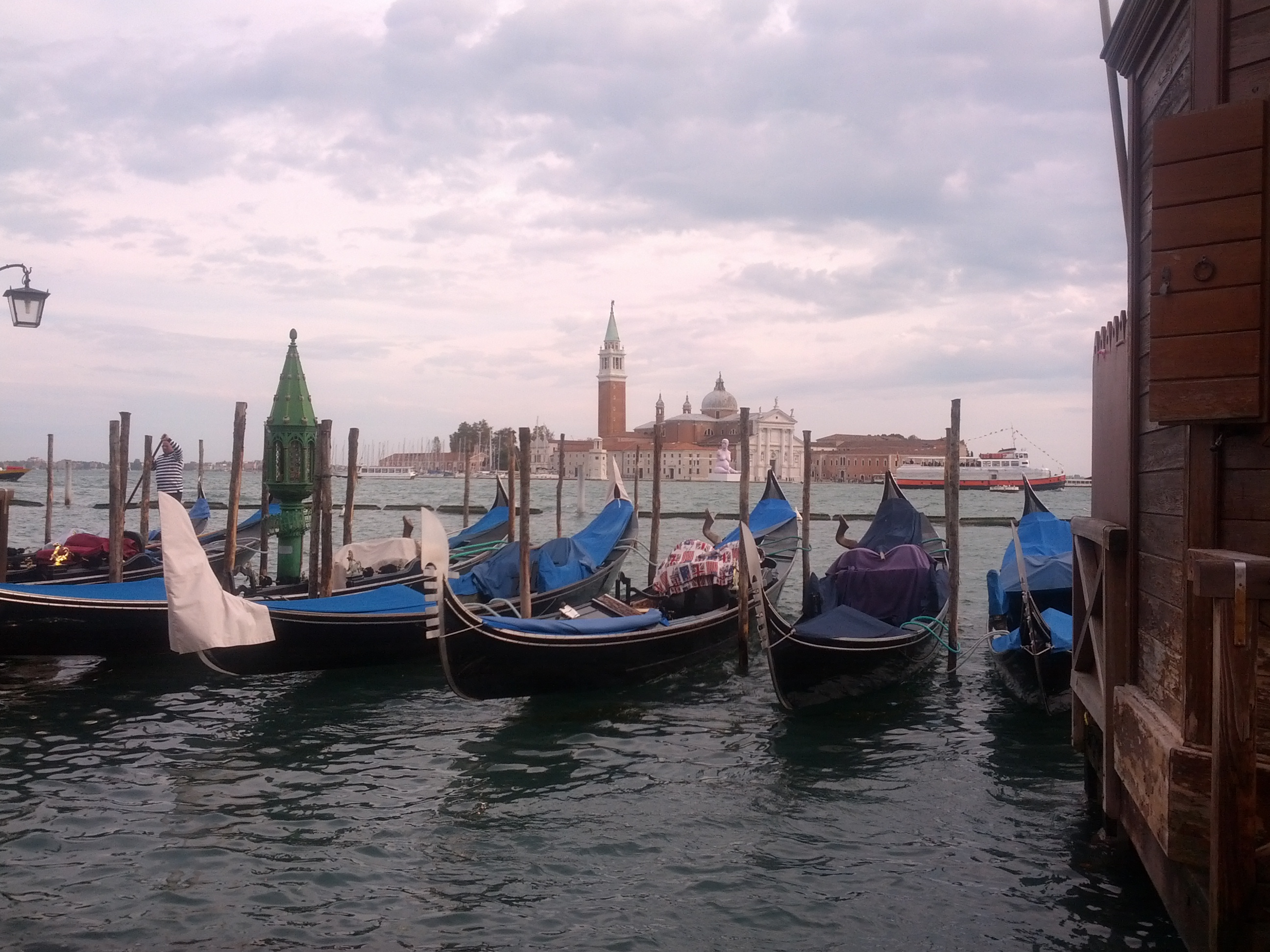 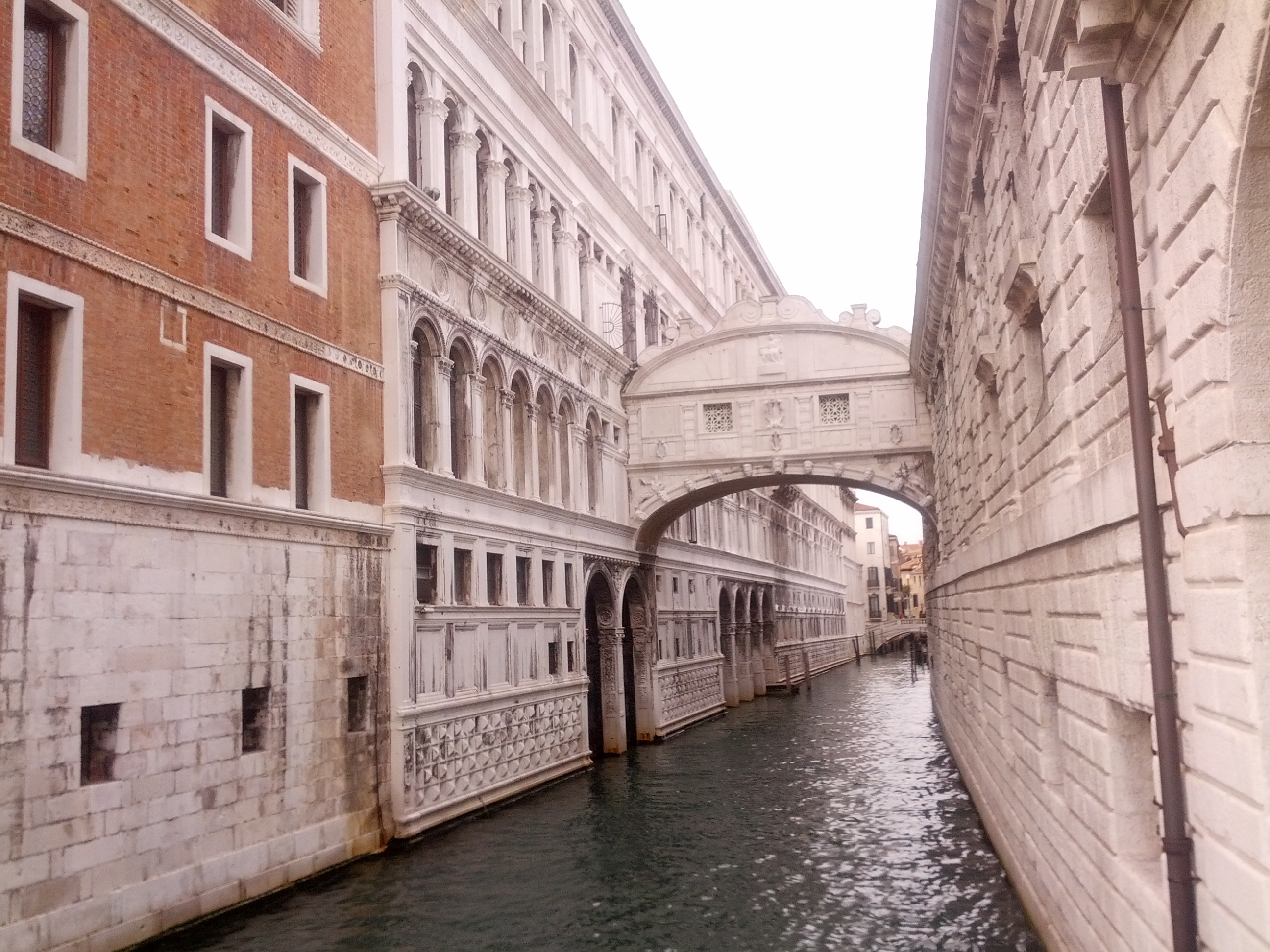 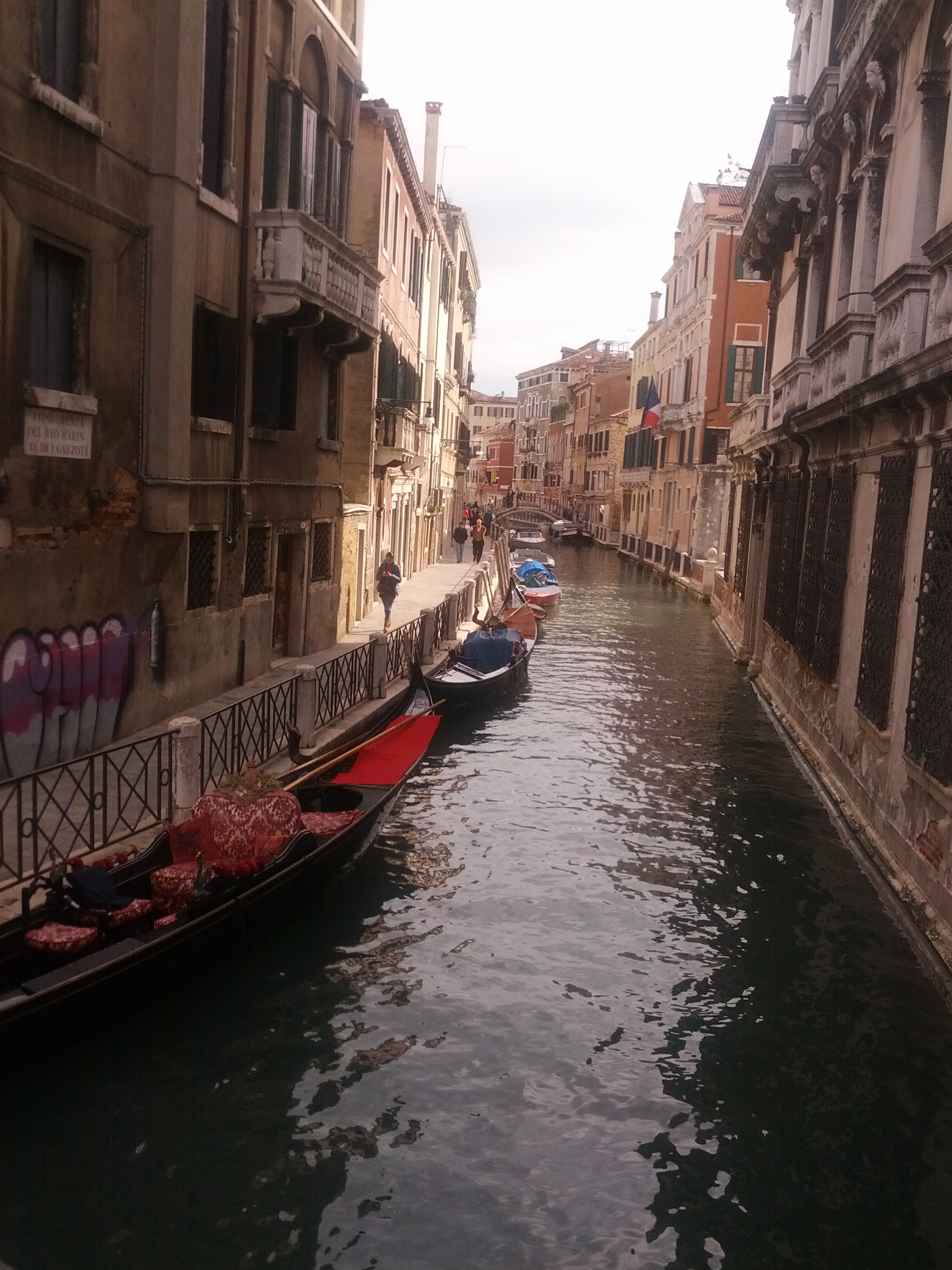 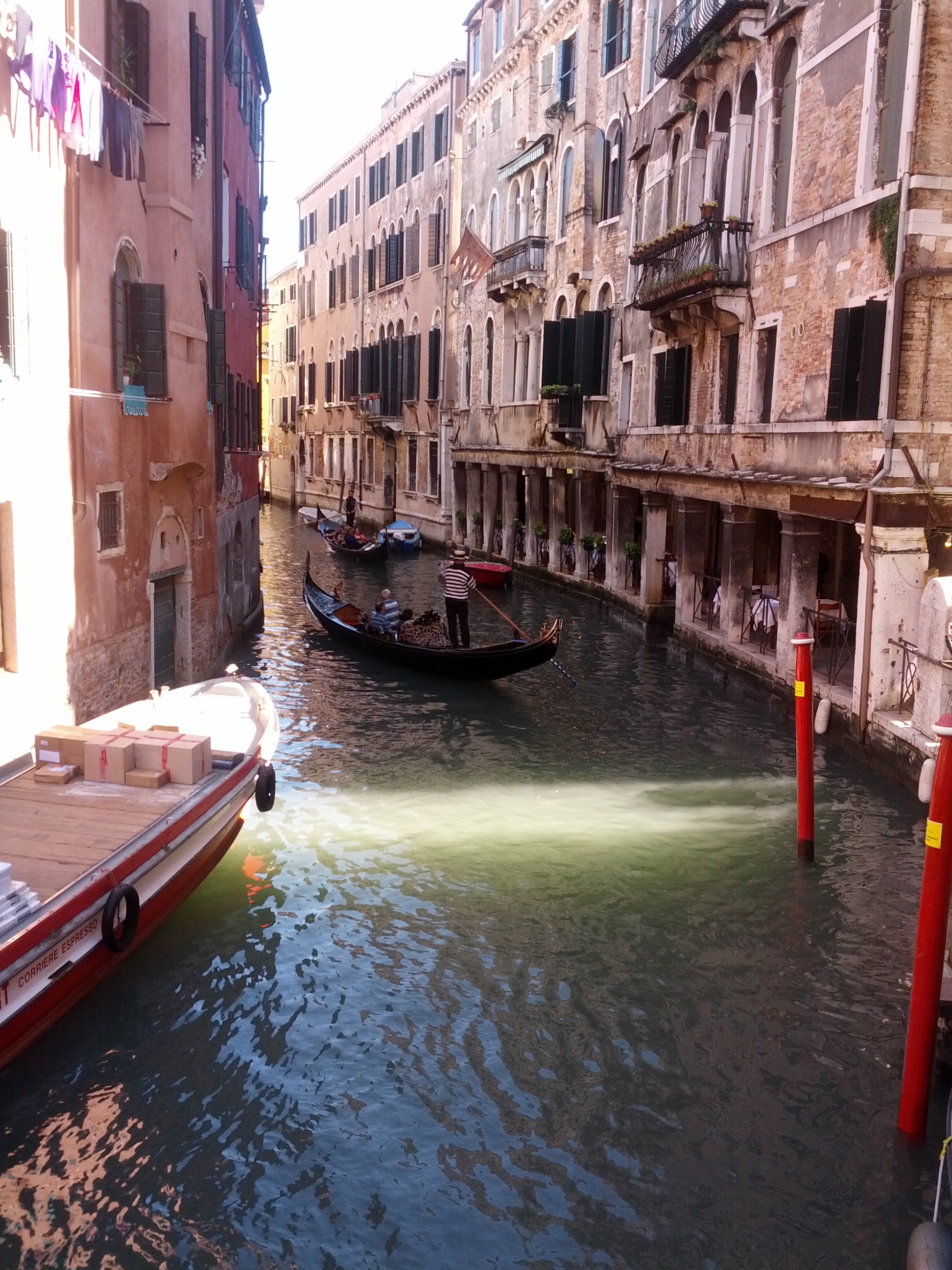 We hung out around St. Mark’s Square after eating, visiting the Basilica di San Marco and then went to eat gelato at La Mela Verde. Florence’s gelato is still hands down the best.

We walked around a lot more and then at night ventured into a bunch of restaurants until we finally found this dingy bar that served sandwiches. The best sandwiches, it turns out. Cafe Noir was its name. And again, as would be the Venice food theme, we went back the next night for more sandwiches.

The next day after eating at Alfredo’s we decided to go on a boat tour. Alana had wanted to go on a gondola ride but they are strictly regulated and cost 80 euro for about 30 minutes for up to 6 people. That would have been a lot of money if we couldn’t convince 3 strangers to come hang out on a small boat with us to lower the price but we wanted to get out on the water.

The boat tour took around 5 hours and we got to visit 3 other islands to the north of Venice: Murano, Torcello and Burano. All awesome, all worth the 20 euro price tag per person. Sadly before we got on the boat Alana smoked her back trying to avoid touching a tourist and spent the entire rest of our trip in a lot of pain. She hobbled around the islands until we got back to Venice where we had to find a pharmacy for her so she could buy heating pads. I wish I was making this up. We were all so sad. 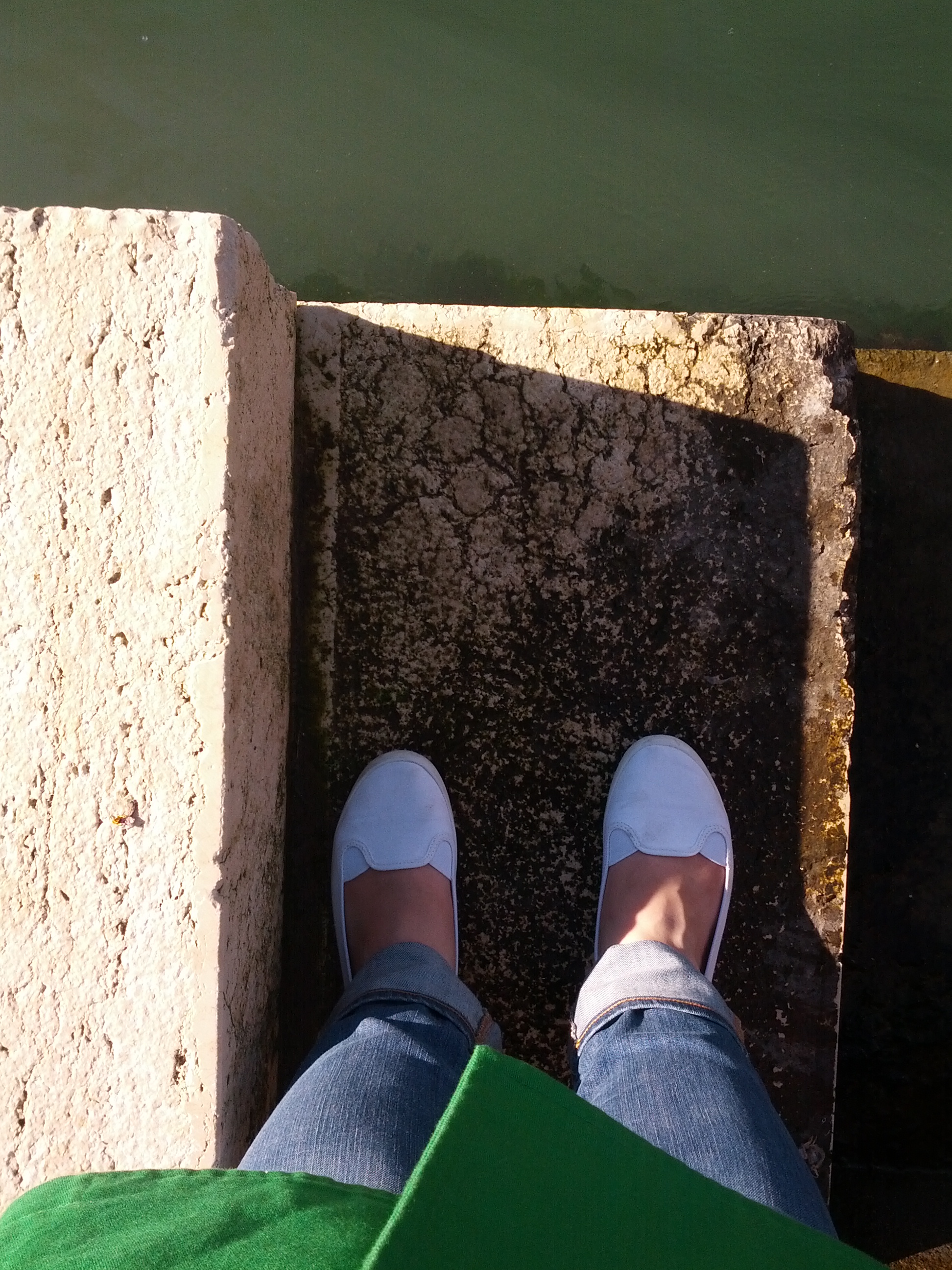 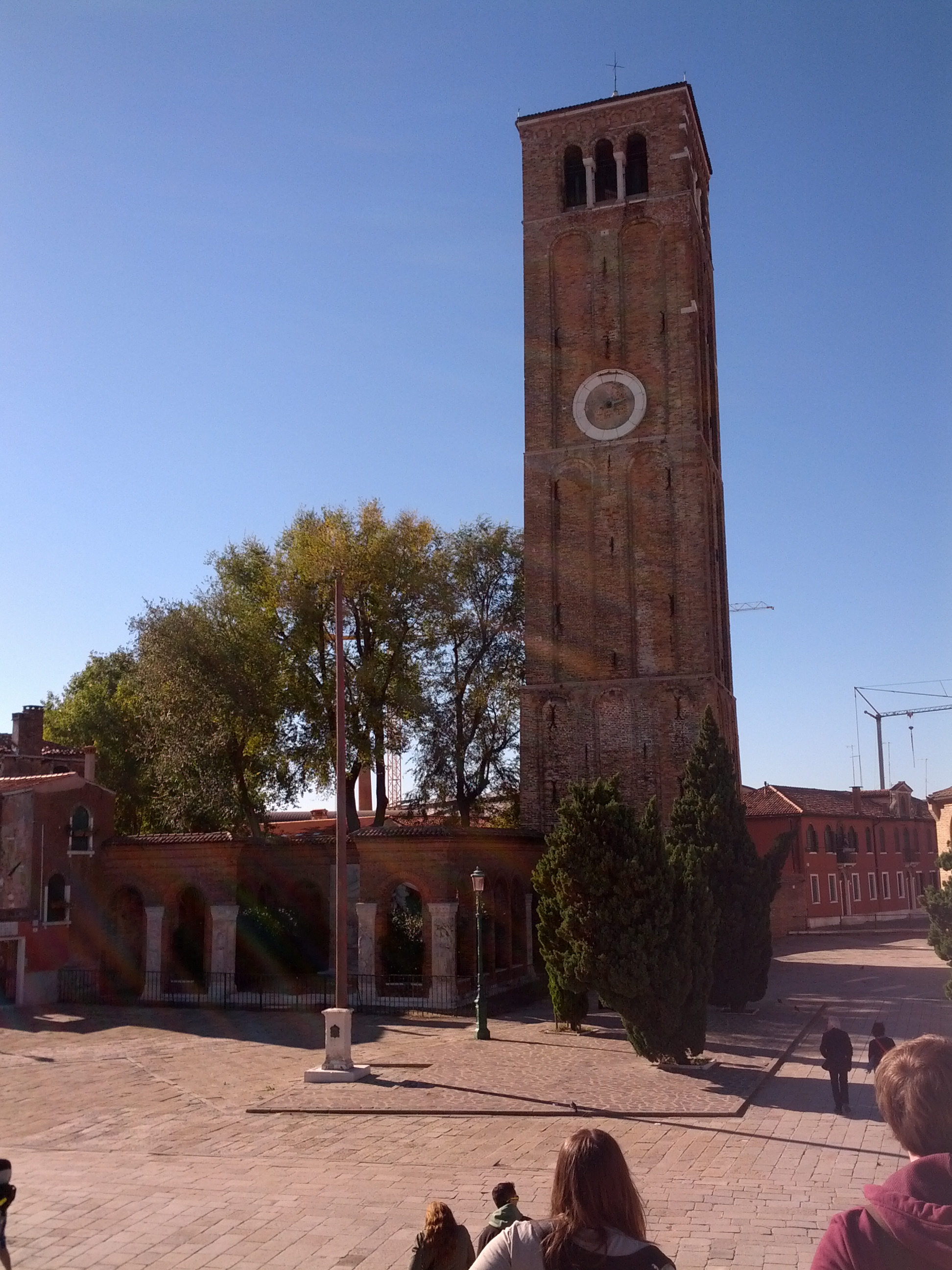 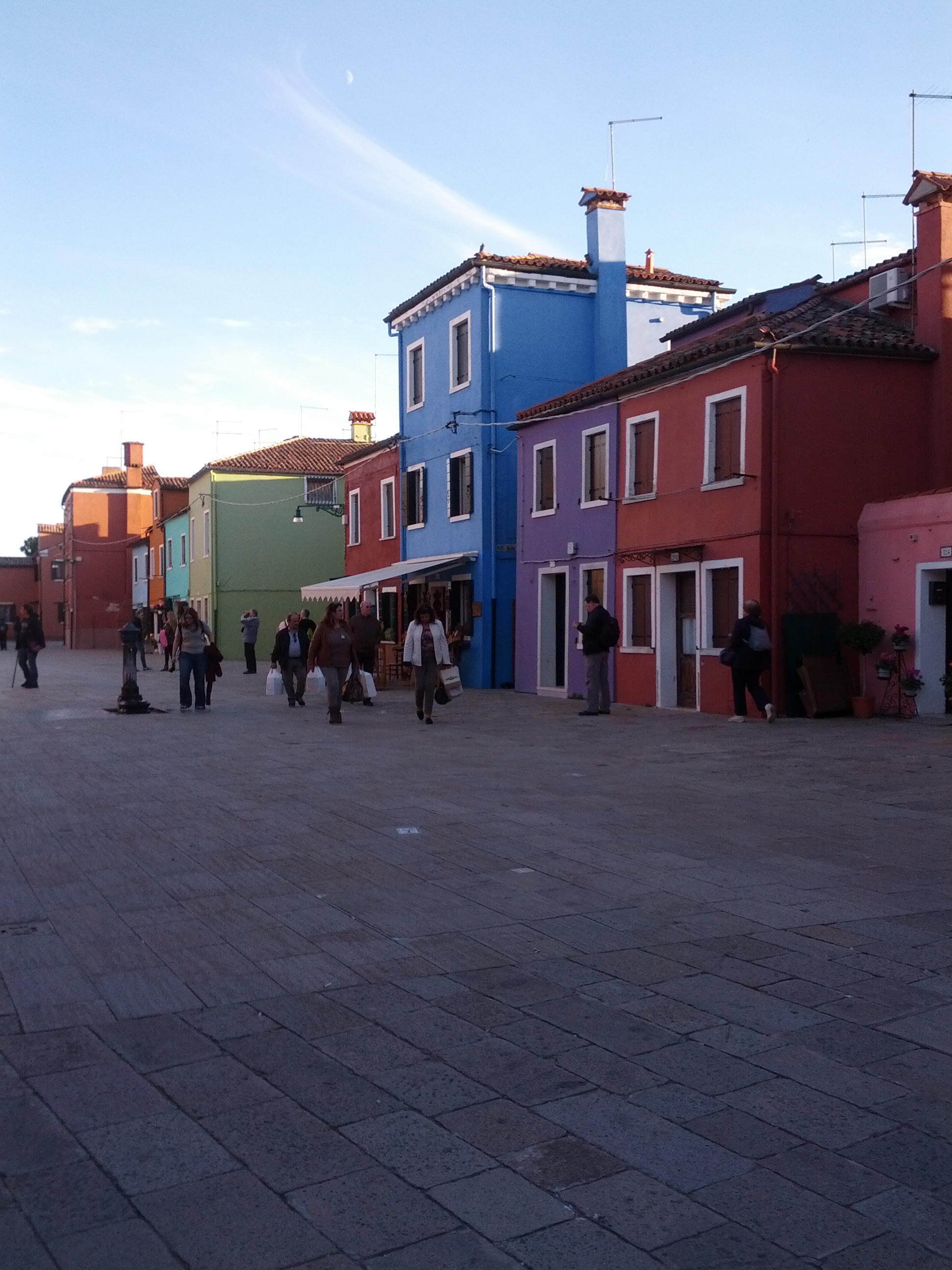 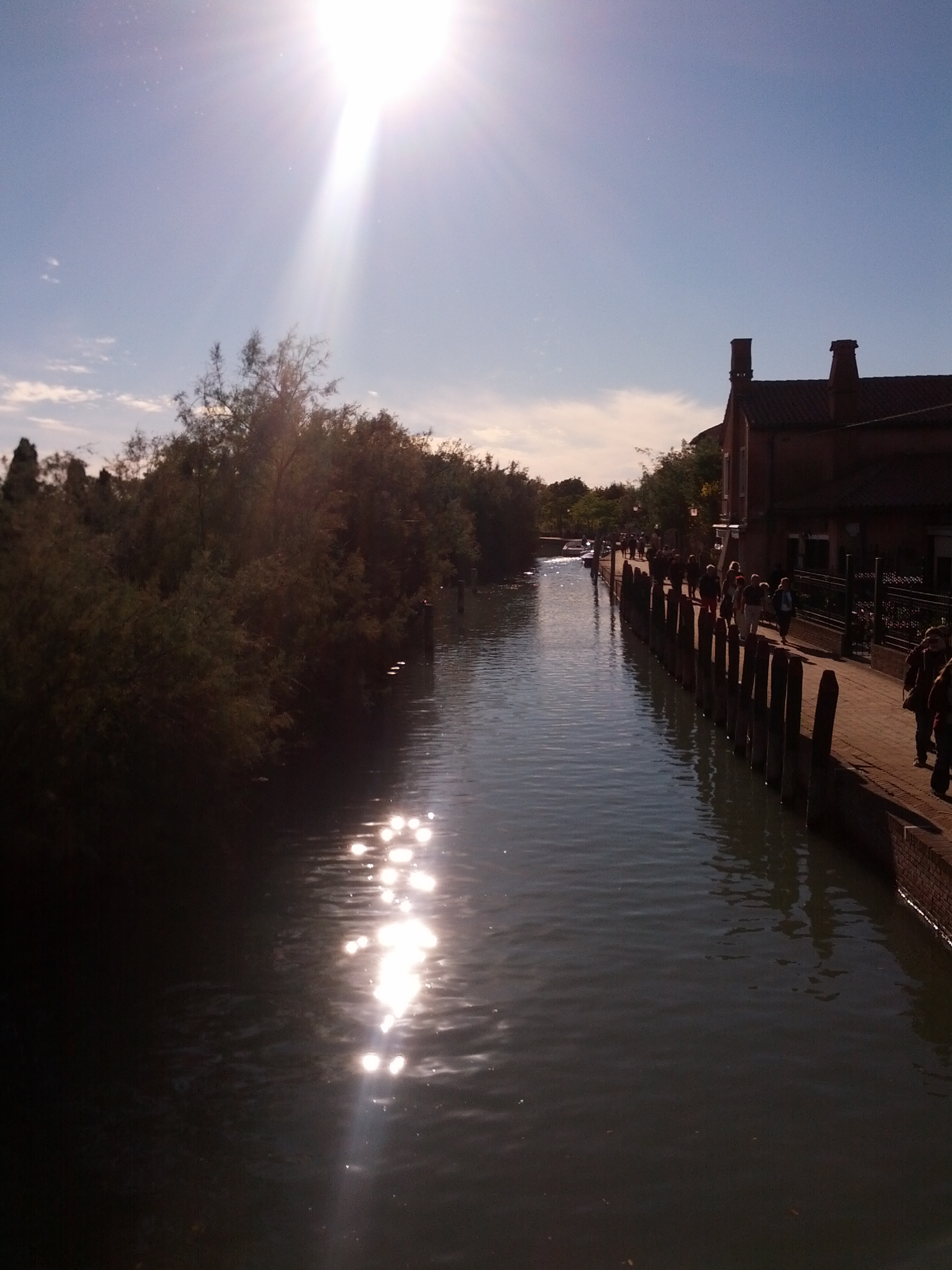 On Murano we saw a glass blowing demonstration, on Torcello we walked around a very old church ground and on Burano we wandered around looking at the colourful houses after seeing a lace demonstration. It was really fun, as long as you remember to get back to the boat on time at each stop because they will not wait for you.

I can’t say for sure we walked in Venice more than in other cities we visited but I can say for certain that we walked Venice 3 times over 2 days, from one end to the other.

The next morning we went back to the train station and waited 3 hours for the next available train back to Rome. We really had shitty train luck.

Last segment in the Italy or Bust series: Rome part 2.