I’ve been working on a few projects since moving to Sudbury. We have a lot more room and access to tools (thanks, Ron!), so I finally get to do a bunch of things I pinned so long ago on Pinterest.

With that in mind my big, main project that I’ve wanted to get done for a while is a headboard for my spare bed. The spare bed can’t really go on a real frame because it is only a really big mattress which would look way too high up if we were to put a box-spring under it. I originally was going to make this one. If I hadn’t kept searching I probably would have ended up doing exactly that. But because we ran into a hiccough in our apartment I had to put the idea on the back-burner for a few weeks. Which resulted in my continuing to search for DIY headboard ideas. I finally found this one and I loved it. The part that I liked the most were the arms with nail-head. The tutorial was very detailed and I deviated only slightly to suit my own needs.

I went to Fabricland in August and bought a patterned fabric that I thought matched my room colours. Nailhead trim is pretty expensive it turns out, I looked around the internet but because I wasn’t sure how many I’d need and they only seemed to be sold in mega-bulk I decided to just use whatever I could find at a store. I ended up at Home Depot and bought 1 pack of nailhead trim that I liked. It matched my fabric so I went back the next day and bought 8 more packs, deciding that if the tutorial used 500 I’d use around 1/2 of that and space them out more. 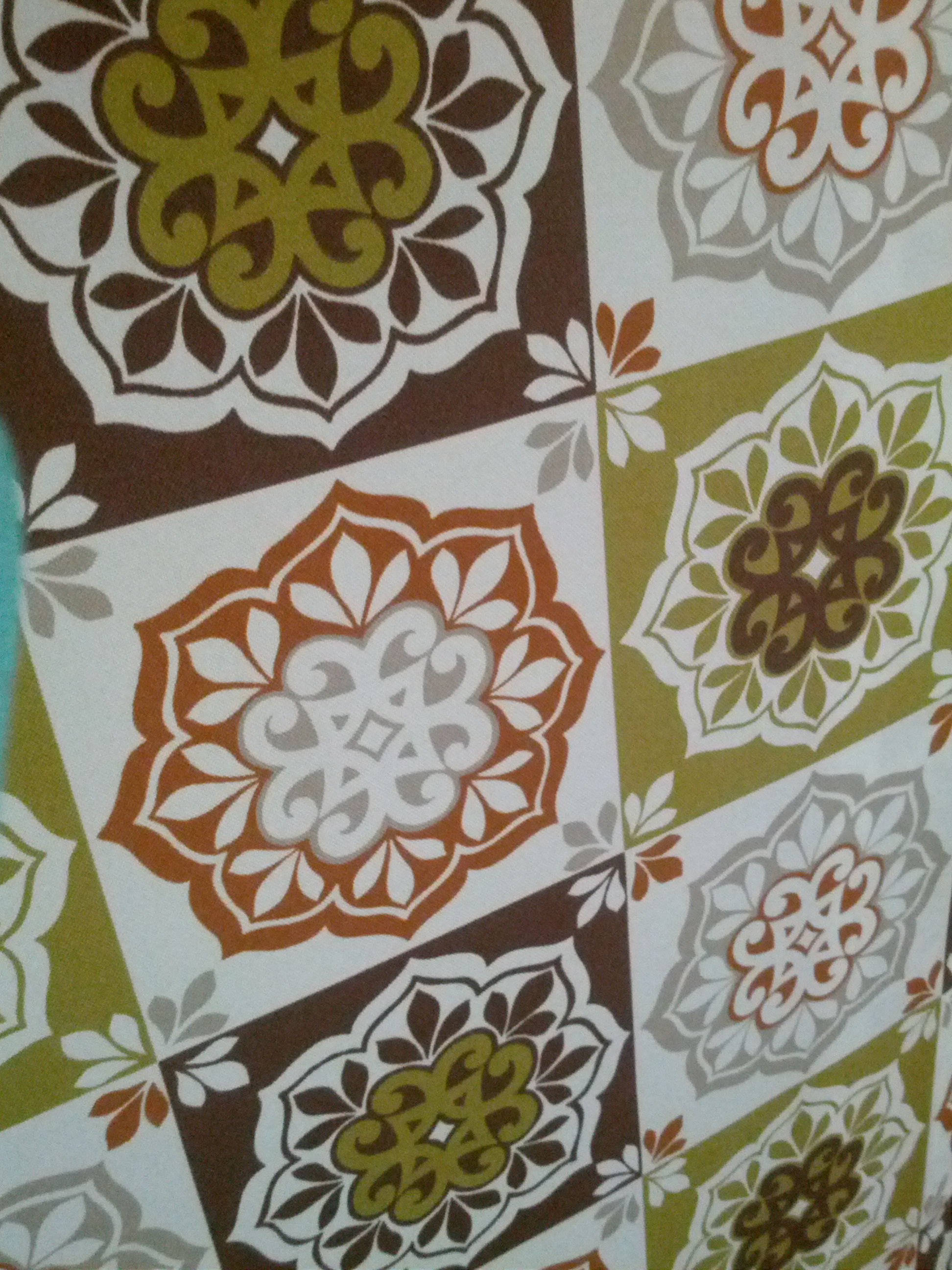 Then I sat on my project for about 5 weeks while life got in the way. When I finally came back to it I decided I didn’t like the fabric at all and went to find a different one. I picked a solid colour this time and brought it home. 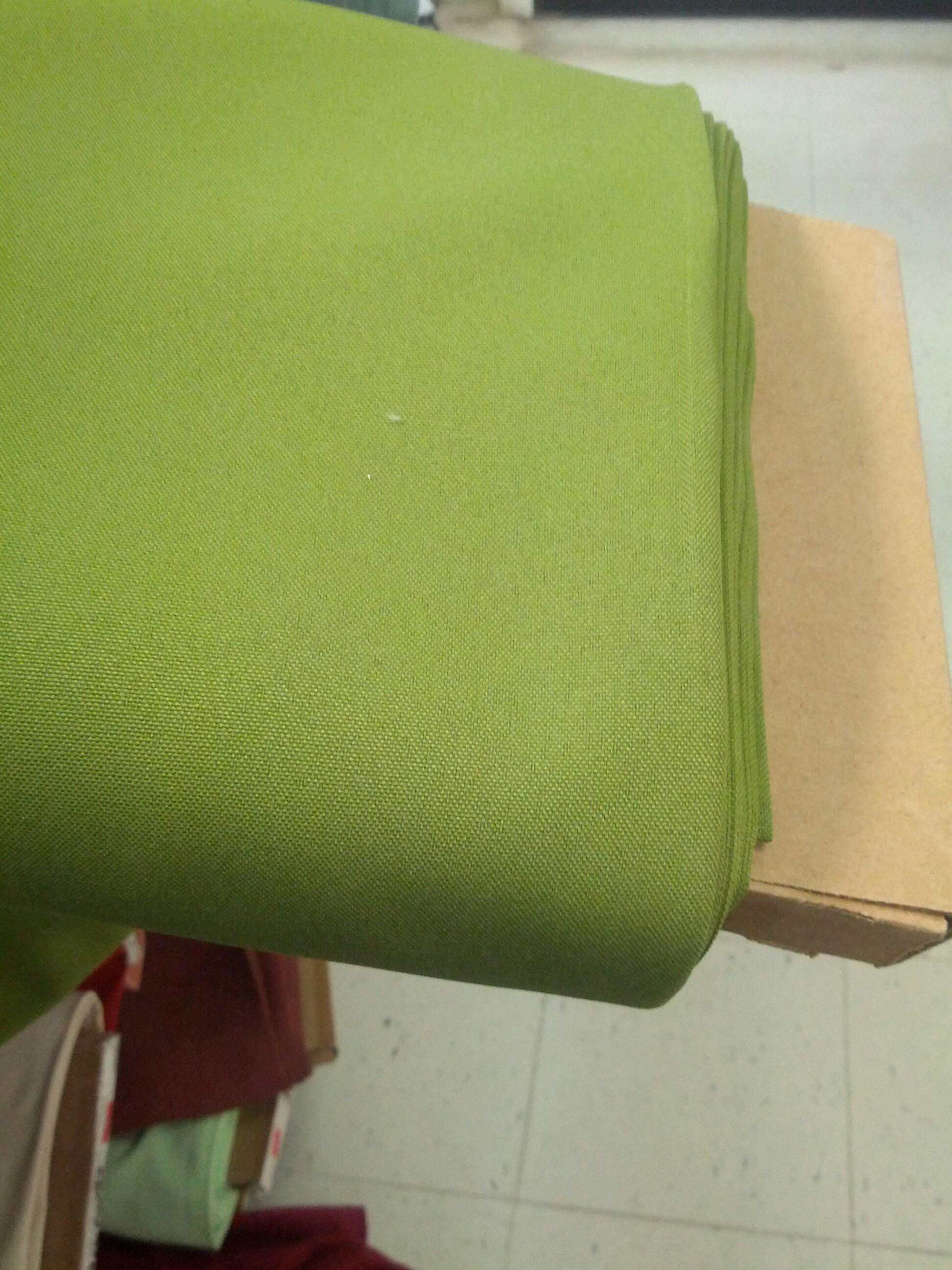 A week later I finally decided to start it. I had found a good foam piece at Walmart during their anniversary sale and then I went back to get the batting a few days later. I just sort of picked at this project until I had all the pieces, really.

Dave and I worked out a plan and my step-dad helped me pick out the right wood. Then he and I cut it all out and put it together. Remember to read your plan, is all I’ll say about this step. If I had read it properly we wouldn’t have had to shim 2 pieces of plywood together when I accidentally cut a piece 6 inches too short. (Sorry, Ron! I’m just learning!) 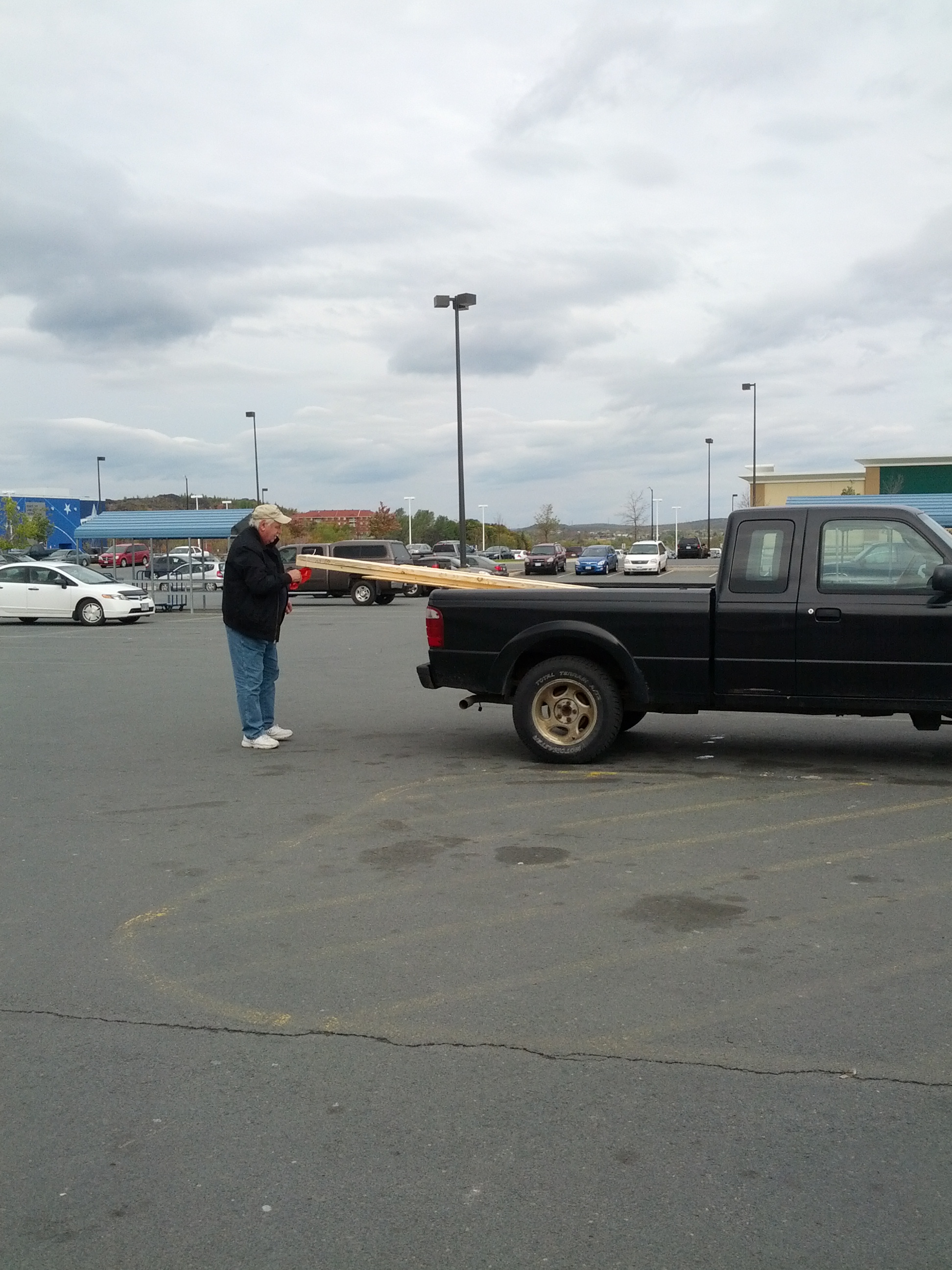 Plywood was cut 61×48. We cut the 2x4s in half lengthwise and measured around the plywood to frame it so that it was framed with 2x2s. The 2x8s were cut into 53 inch segments and screwed together to create a wider arm for the headboard than the tutorial originally suggested. I just thought this would look nicer in my room. I also didn’t make it nearly as tall as suggested because I wanted to eventually put my bed under a window and the window was 54 inches up.

We managed to get it back to my house. The next night Dave and I got to work on it. First we did as suggested and attached the foam to the wood with adhesive. After we had waited the hour for it to dry Dave cut the excess off. 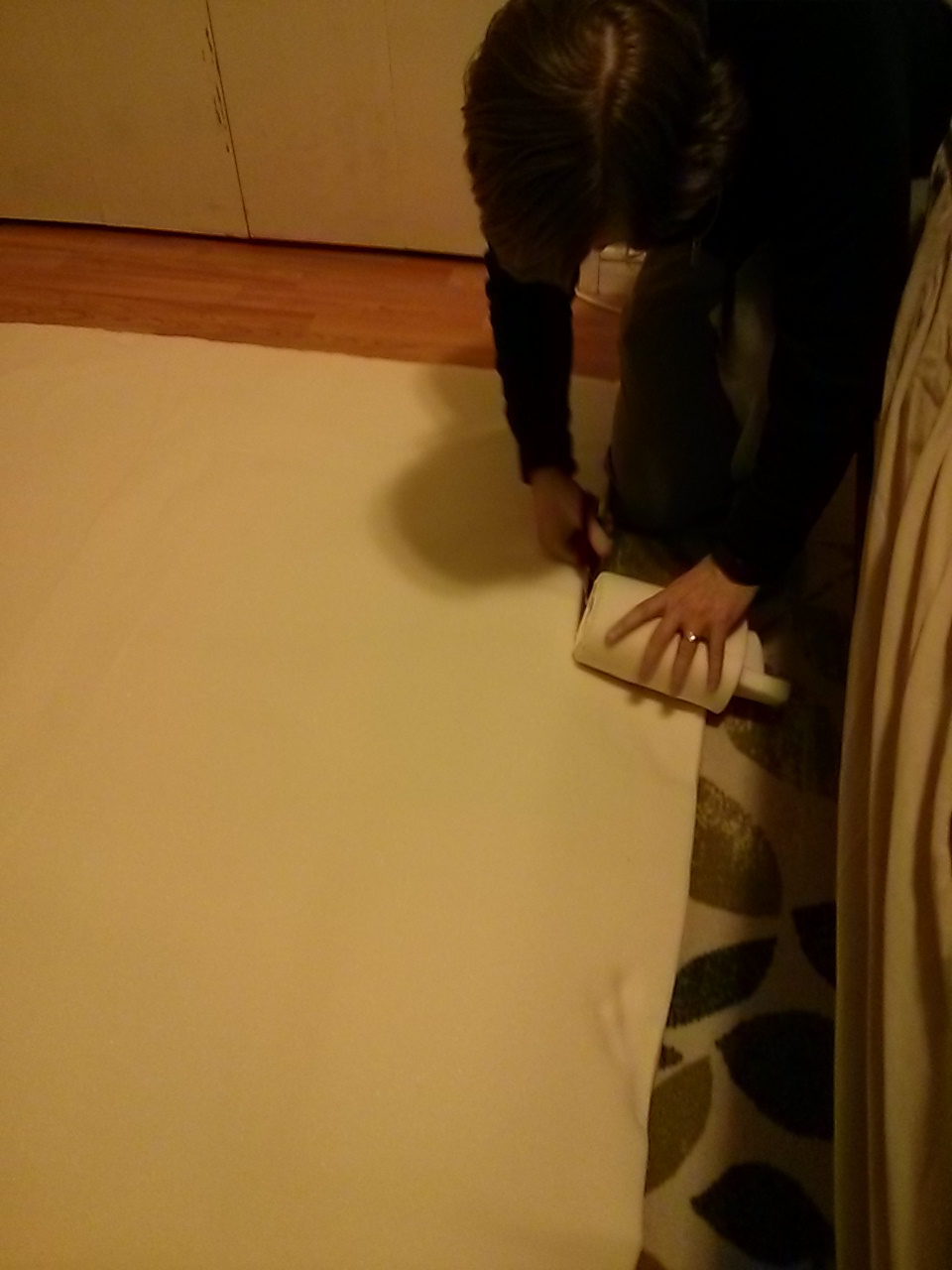 We moved it out into the living room after this and flipped it over at that point. We decided that the original fabric I bought actually was nice and that if we went with it we didn’t have to do the buttons. We had already laid the batting on the floor where we were going to put it. I can’t stress this enough: think about what your next step is to make your life easier. 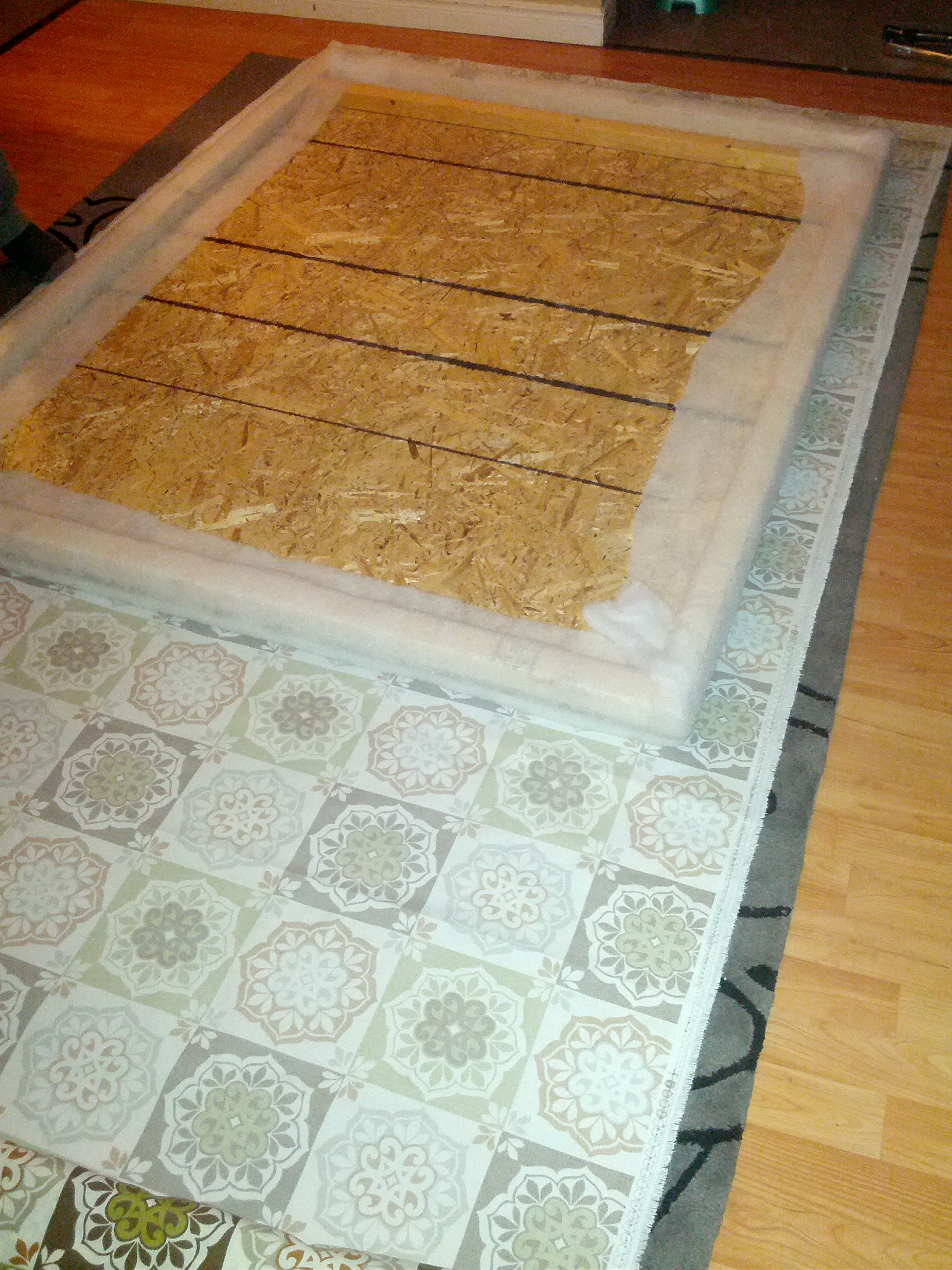 After that we stapled it to the board. We decided to cover the whole board instead of just the front like the tutorial did. We just wanted a cleaner look. This isn’t really necessary, only Dave and I will ever see the back when we move it around. We stapled the batting and then stapled the fabric. (The next picture is the back, as you can see we covered the whole thing.) 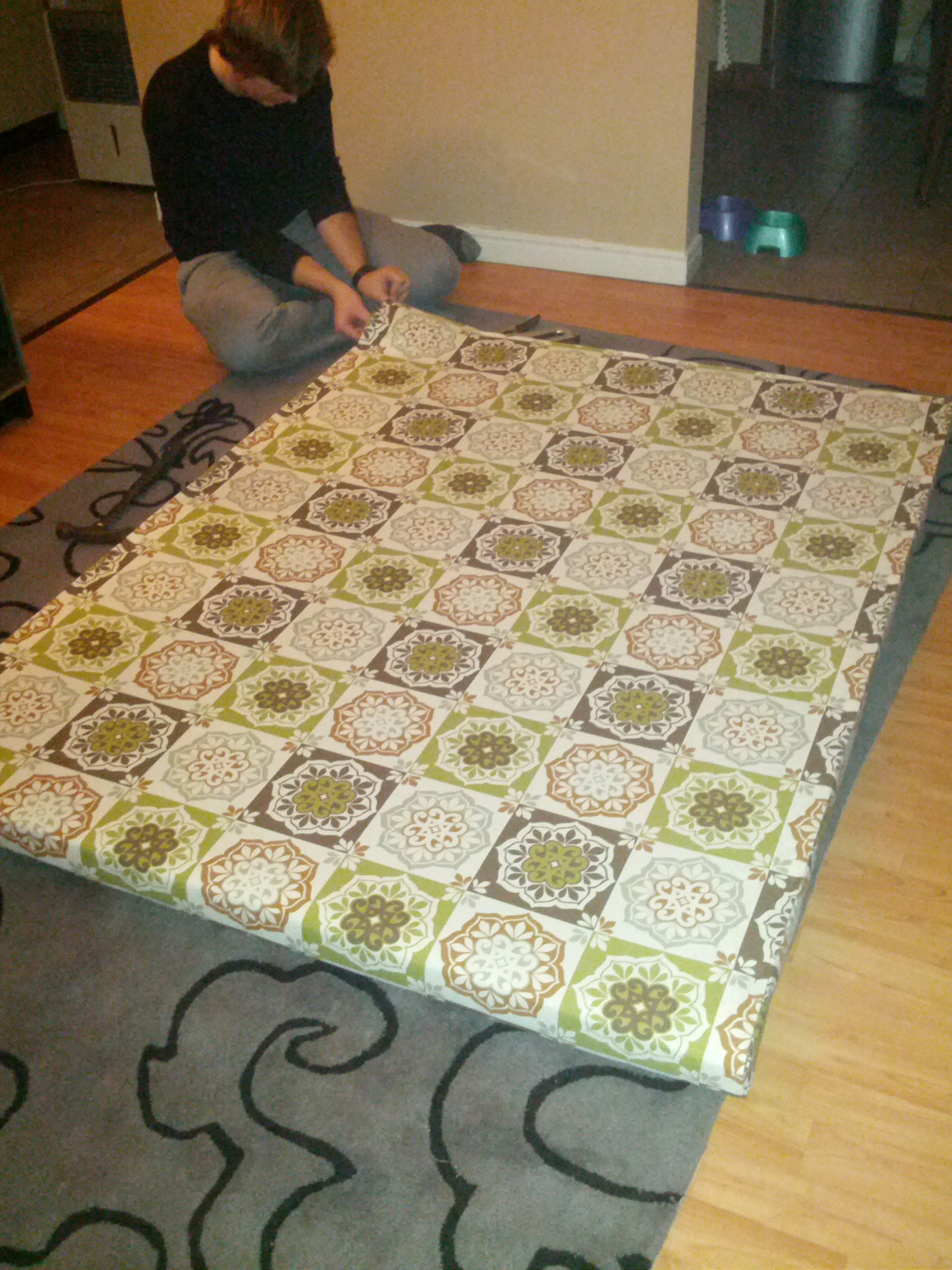 Afterwards we got to work on the legs. It’s trial and error. Pace yourself and make sure you work with someone who won’t get mad at you when you ask 100 times in a row if you are screwing it all up. We stapled the batting to the back of the legs and then stapled the fabric (we went with the second fabric for the arms so that the nailhead really showed). Only staple the back! This is important! 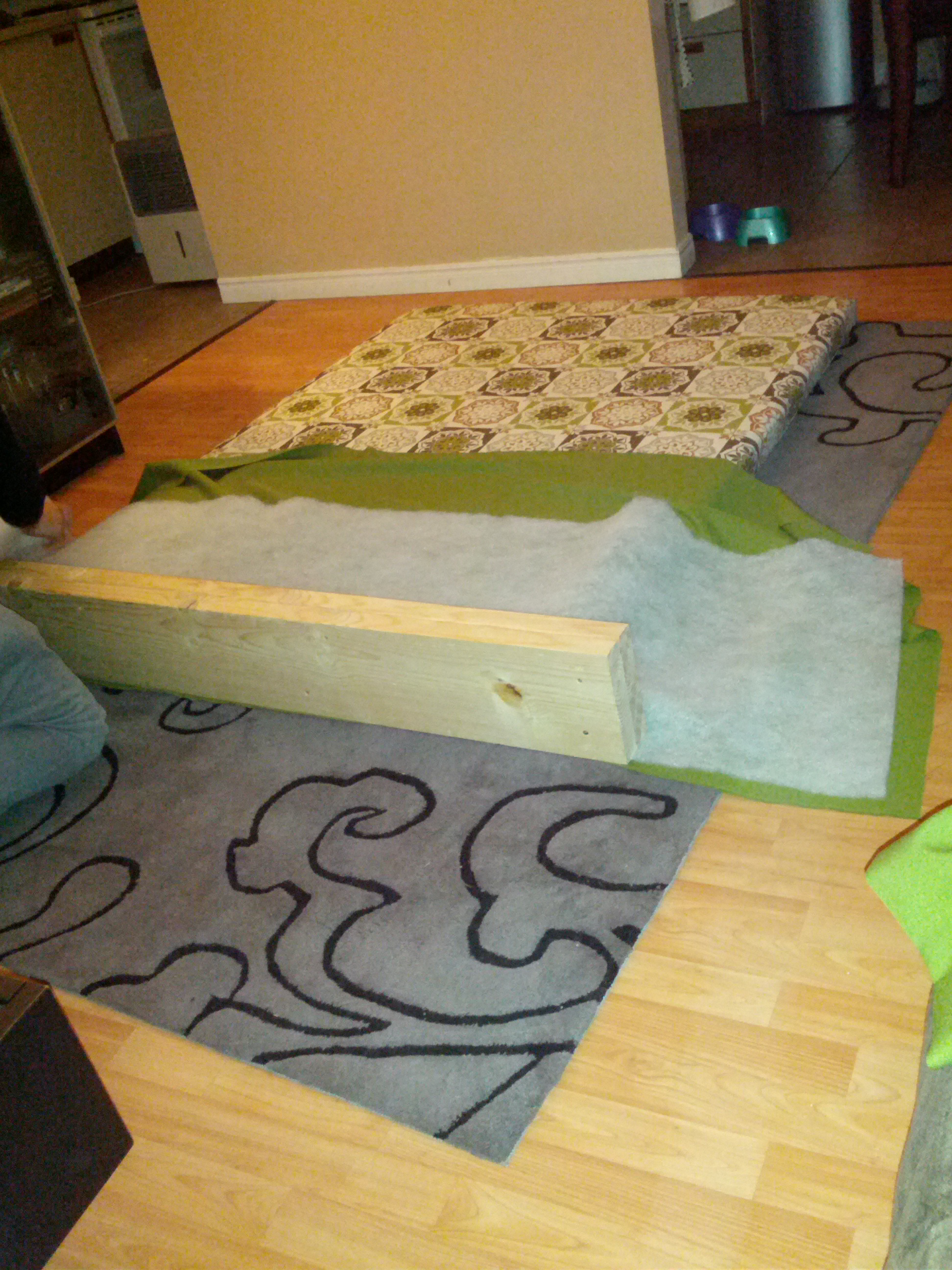 Once we had it lined up we measured 5 places to drill our holes. We only drilled up to the first fabric and then made little holes for it to come through. We did this to avoid pulling the fabric and having it all bunch up in the screw. Once we had done that we screwed it the rest of the way into the body. 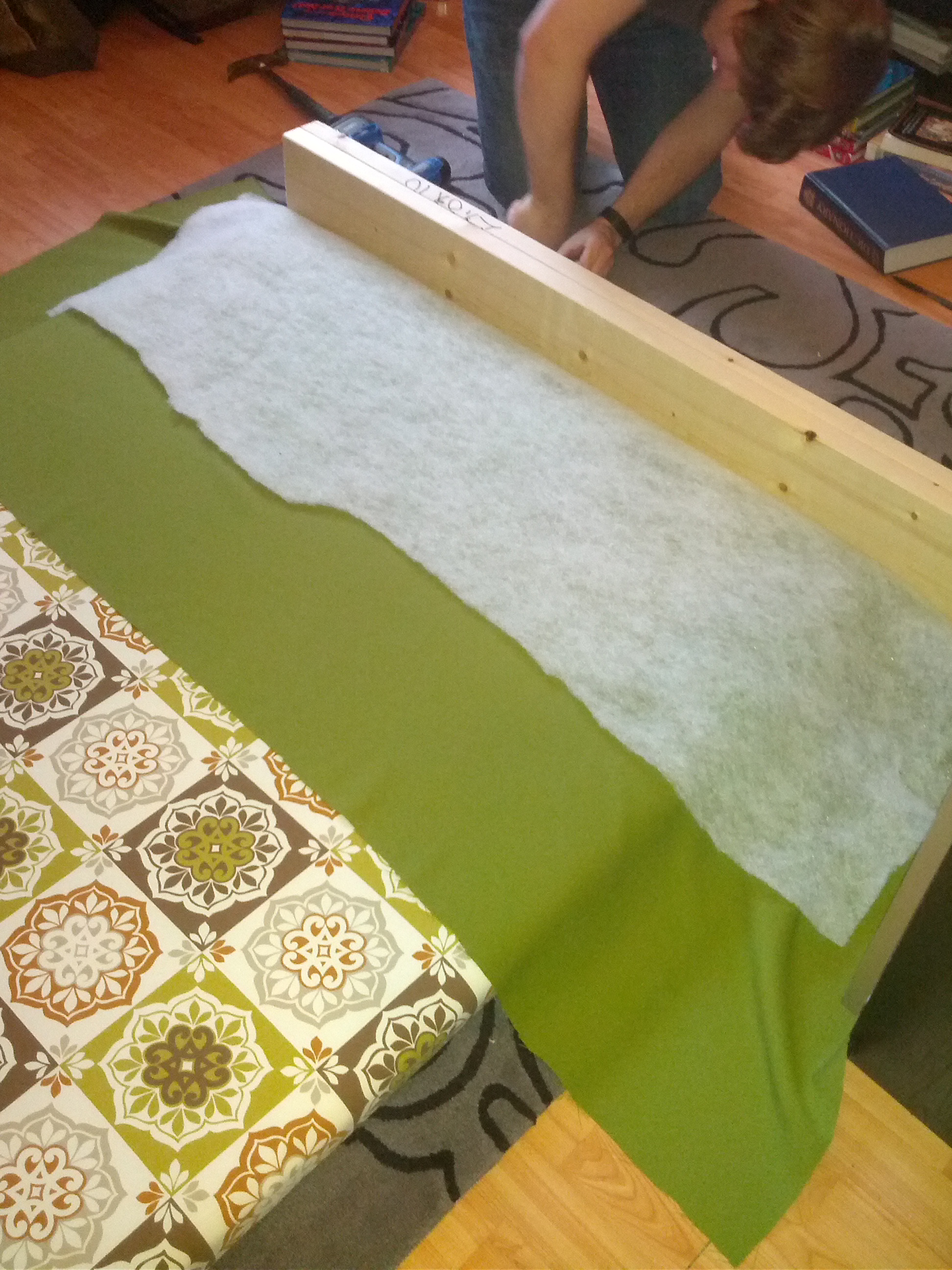 Then we tilted the headboard on its side so we could work on it standing up. It takes a lot of time to get corners right. You will fuck them up unless you’ve done it 100s of times before. Just don’t staple anything until you really like what you’ve done. After we had done the top corner we folded the fabric over and used our staple gun to go all the way to the end, where we fixed the bottom corner and switched to the other side, using the same process.

Once we had done both arms we flipped it back on its back and started to nail-trim. We used a big ruler, it was the easiest way. We taped it down using masking tape and every 1 inch we nailed one in. It takes a while but is worth it. 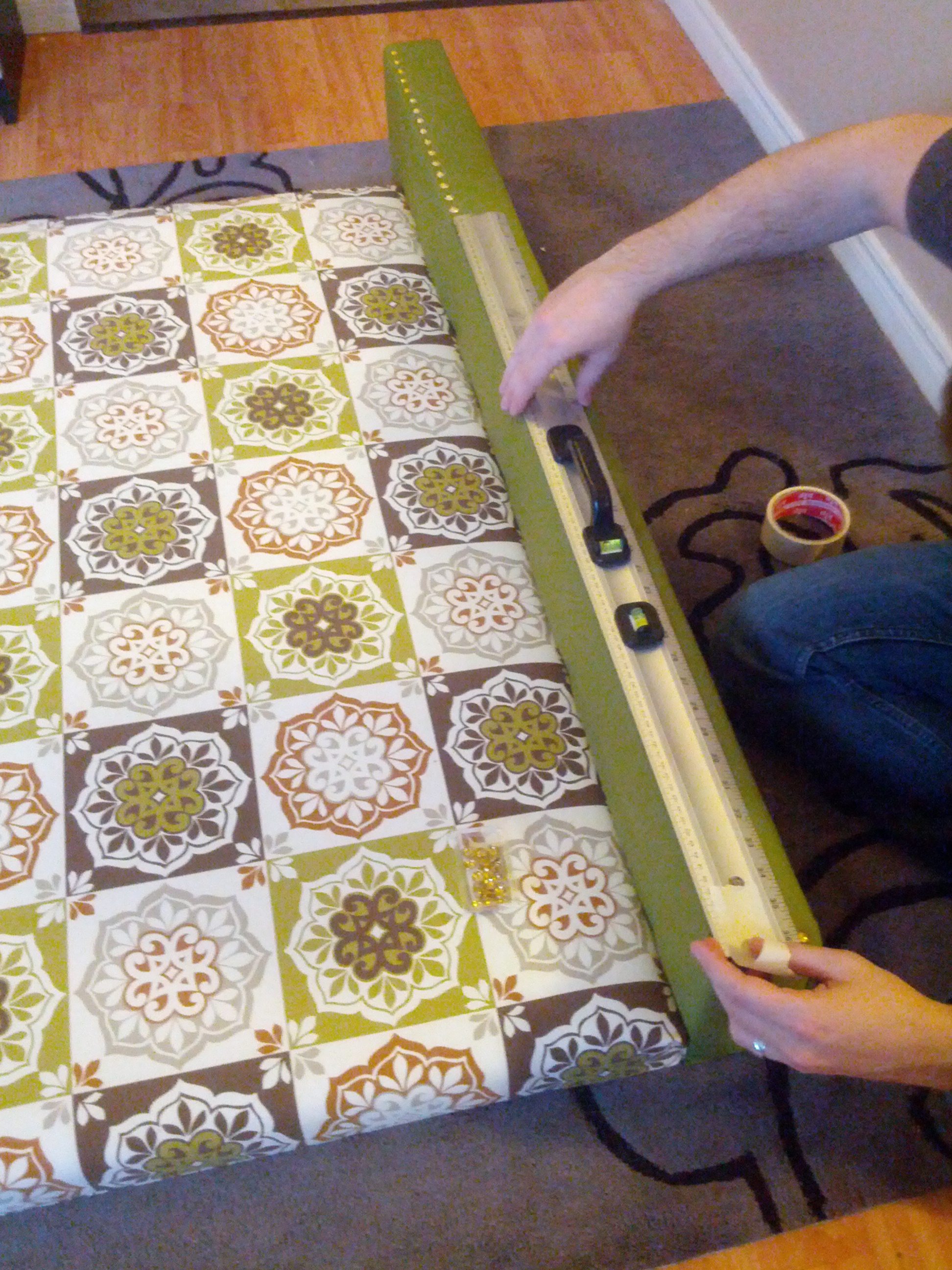 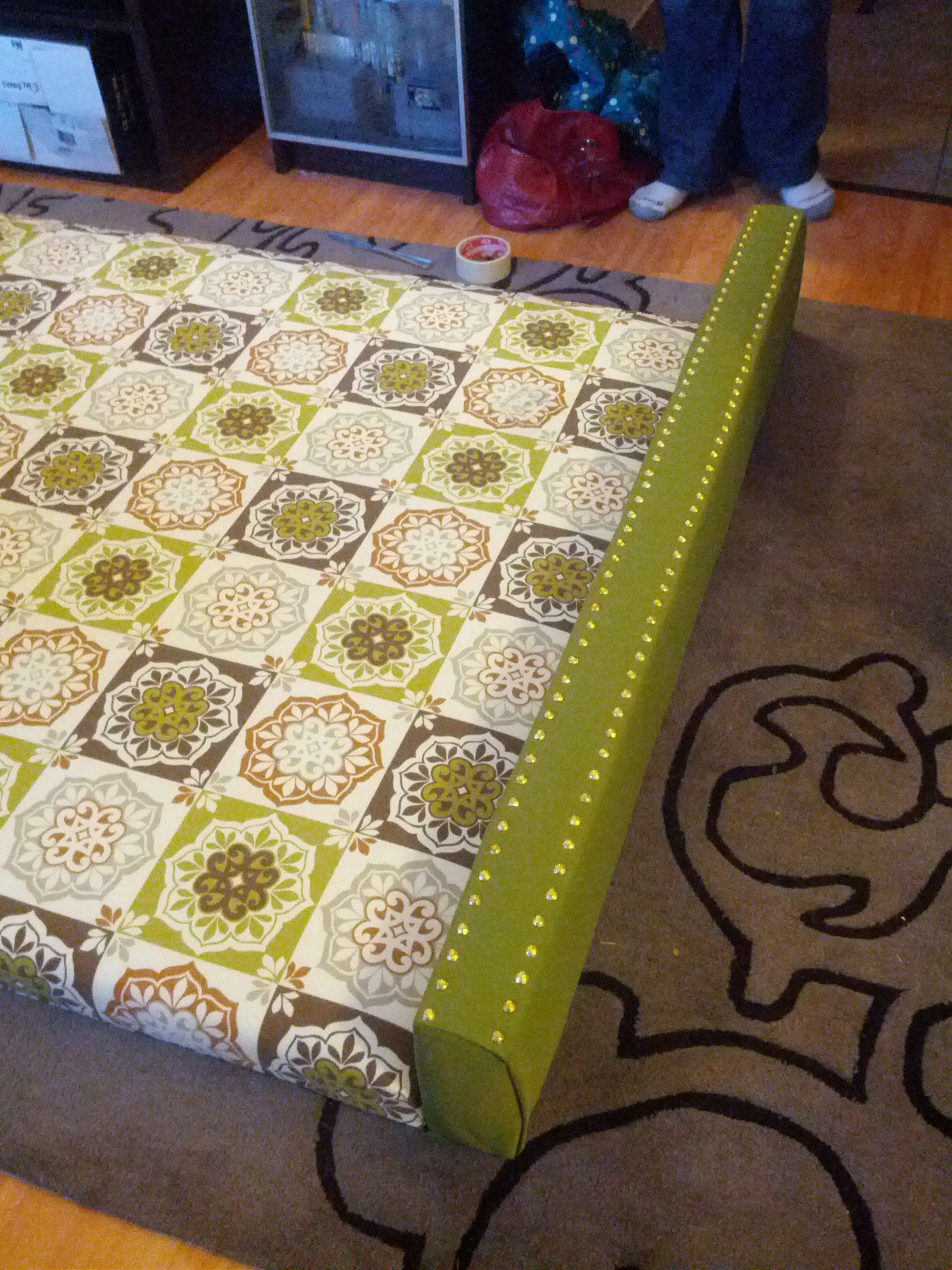 Finally it was time to put it into the room! 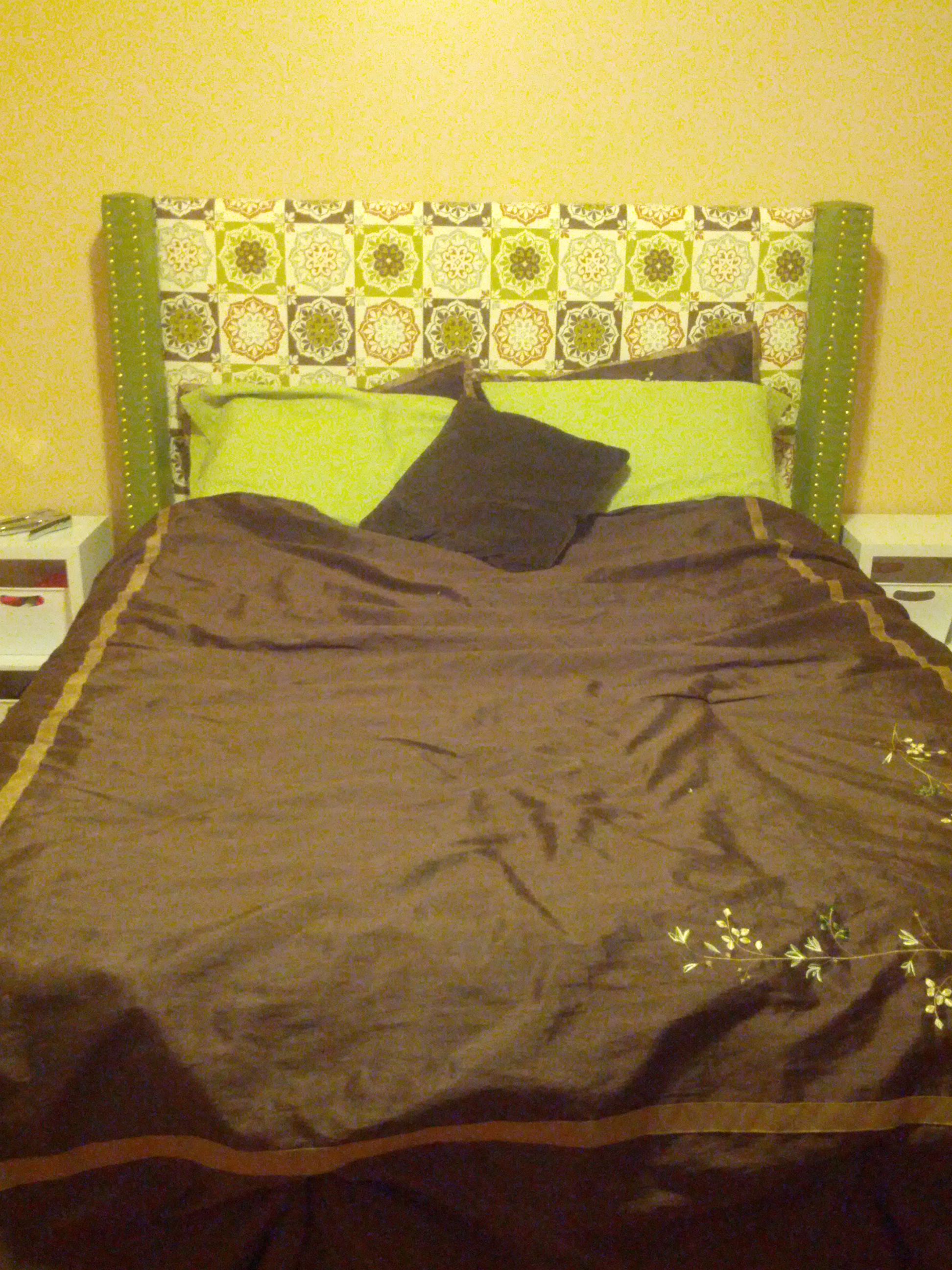 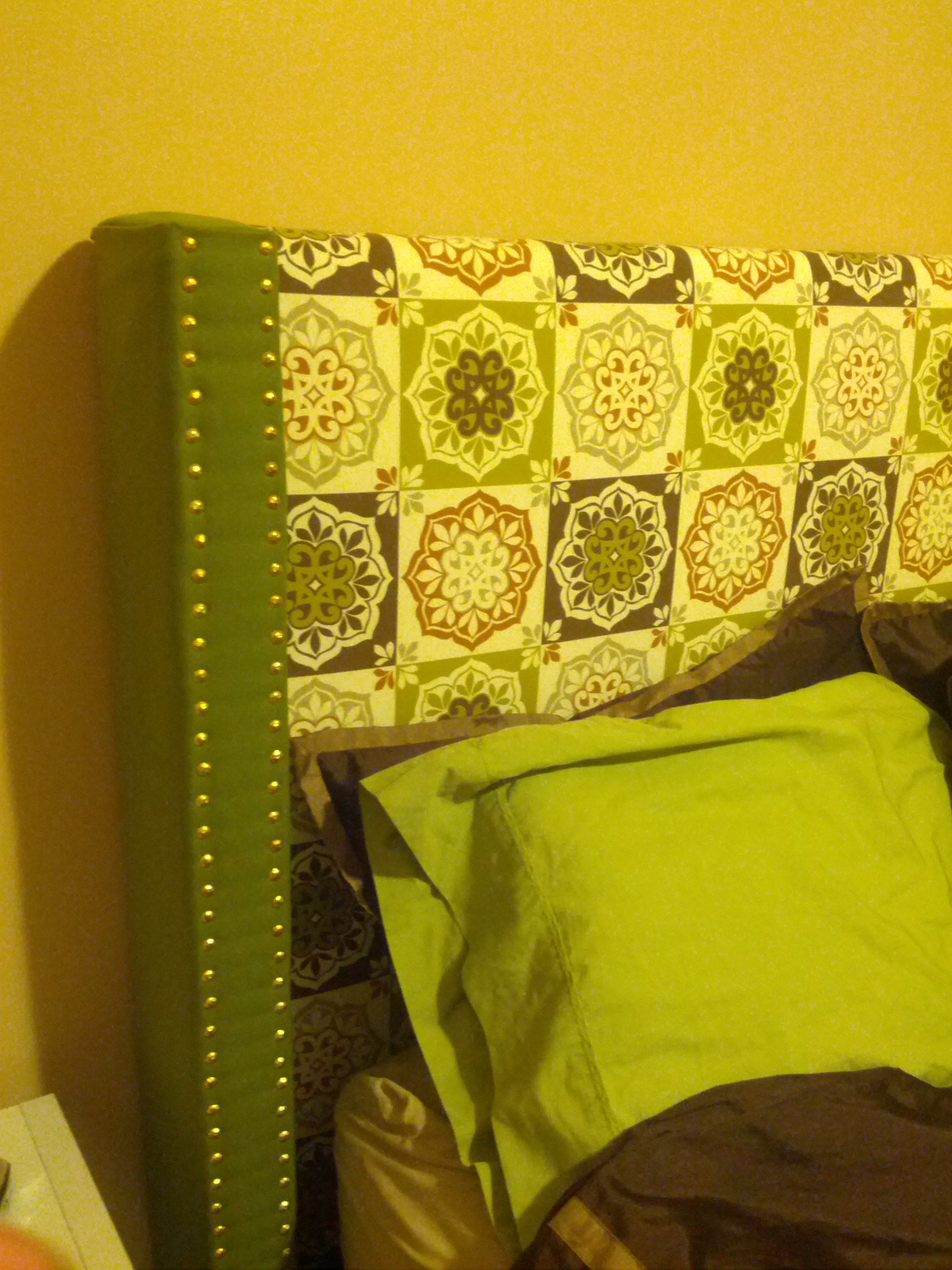 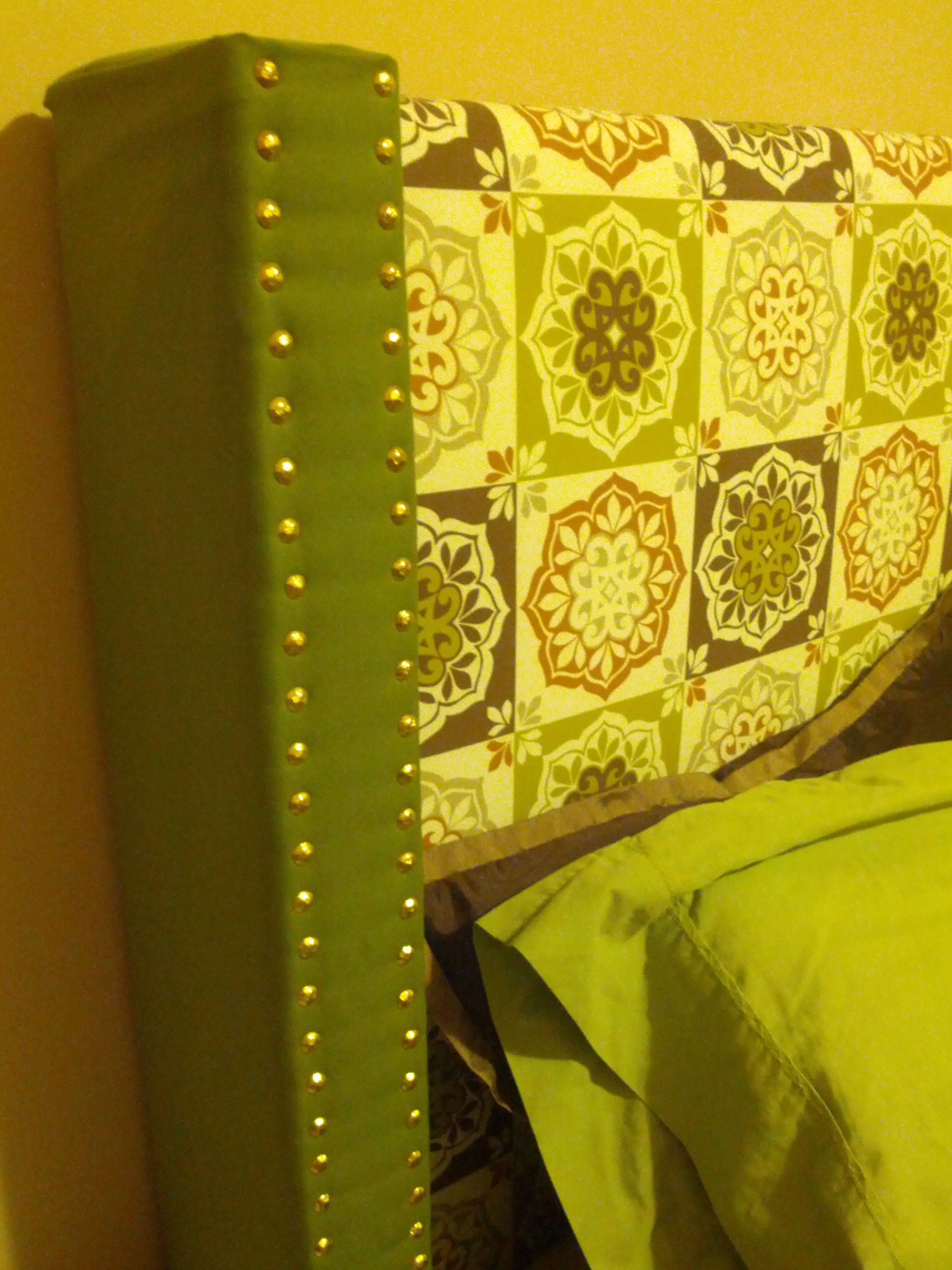 Yay! I love it! Can’t wait to put my blinds back up and finish the boxes on the sides to match.

So, what did I take from this project? The thing I’ve learned about DIY-ing is that you need to pace yourself. Don’t rush out to gather your materials and then start your project just because you saw a picture you like. You need to work through how the project will be done many times. Draw some pictures, *take a lot of measurements*, do a rough draft. Trust me, don’t just jump in to something you haven’t done before, a little bit of thinking ends up going a long way.

The other thing I’ve learned about DIY-ing is that you will fuck up. Like majorly. It’s ok. You’ll be able to fix your mistakes, or at least have a great laugh about them one day. Without trying you’re never going to do anything, right? So take chances, get messy and make mistakes as my favourite animated teacher would say. Good luck and I hope this helps!