We had a nice little Valentine’s Day a few weeks ago: Dinner at one of our favourite restaurants, non-Keto treats, laying around = pretty great. We don’t normally get each other anything but I’ve been itching to do something art-y and figured this was a pretty good time to do some mushy art-ing.

I had pinned this tutorial awhile back and originally thought I’d make a long rectangular Clarke sign but couldn’t figure out where I’d put something like that so I held off. I had also seen this at some point and liked the idea, so I kinda combined both of them to make something relatively easy but very Valentine’s-y without it being too Valentine’s-y to be out all year.

Here’s what it ended up coming together as: 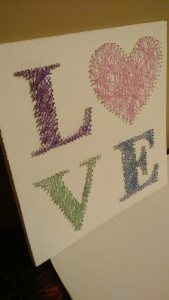 Dave liked it, he swore!

To make it I bought  2 pack of cork-board at Dollarama, a pack of different coloured thread and I already had the pins from my Christmas Ornament Ball project I did a few years ago.  So it costs be about $4 to make it.

I started by gluing the two pieces of cork together and painting it white with acrylic. I did two coats of paint. Once dried (I used a hair dryer because I’m so impatient), I attached my letters with tape. I sorta eyeballed how big the letters had to be and printed them off one at a time. I think I’d pick a different font if I did this again because Times New Roman has really skinny parts which don’t really lend themselves to stringing thread between it turns out. 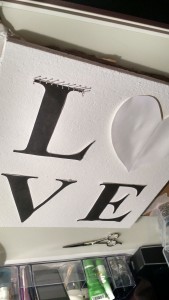 After they were glued down I started to pin around them. I’m not sure how far apart the pins were, I just eyeballed that too, I’m very profesh about art. I figured it they were too far apart I wouldn’t be able to get very many “strings” but if they were too close together I’d be at it forever. 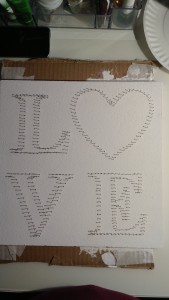 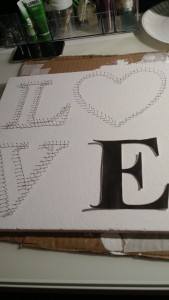 I pulled the letters off after all the pins were on, and then I started to string the thread. 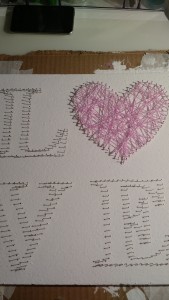 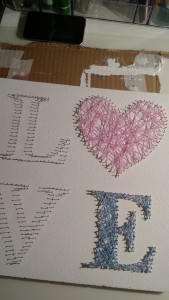 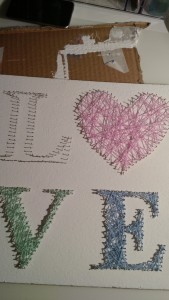 It was slow going and I had to repeat so many times because the thread just sorta slips off if you’re not careful, or gets tangled in the pins. There are many things that can go wrong but if you tie it on at one end and then loop it twice around most of the pins it tends to stay on so much better. I went over a few parts that I thought weren’t string-y enough and I’d say it took me about 30-45 minutes per letter depending on how much I screwed up or how intricate the letter was (the E took way longer than the heart, for instance). 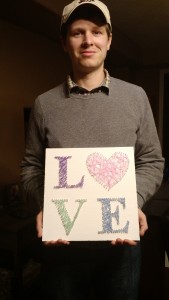 I’m going to put a cheap border on it somehow, at 12 by 12 it’s an awkward thing to frame, but I’ll think of something, and then I’ll put it on a wall, one of many I now have to fill because buying a 3 storey house means I have 50000 places to put art!